The W Technique is one of the most common techniques a goalkeeper will use to catch the ball. It is usually talked about as the method of catching shots struck at head height – but it is also used when dealing with crosses and making diving saves.

This method is called the ‘W Technique’ because the goalkeeper’s hands make the shape of a W when catching the ball. To do this the goalkeeper spreads their fingers and brings their two thumbs together as can be seen in the image below. 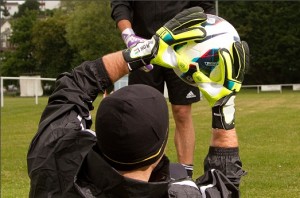 In this position the thumbs are firmly behind the ball and the fingers wrap around the contour of the ball (which is why this is sometimes referred to as a contour catch) to ensure that as much latex is on the ball as possible.

For younger keepers (whilst building up strength) they may need to move more of their hands behind the ball to ensure that the shot power doesn’t push through their hands, but this will come at the sacrifice of better handling.

It is important that wherever possible that the goalkeepers hands are wrapped around the top half of the ball rather than the bottom. This allows the keeper to control the shot and bring it into their chest easier and most importantly means that if the ball isn’t caught that it will drop down in front of them allowing them to recover it rather than going over their head and into the back of the goal.

So, we have our hands in a good W position and we are going to try our best to ensure we catch the top half or 2/3rds of the ball. What else do we need to consider?

For a shot struck with a lot of power we need to use our body as shock absorbers and will use a variety of tools to do this!

So the first thing we will use is our hands, we will have soft hands to absorb the ball rather than parry it away but have strong wrists so that it doesn’t push our hands out of the way.

Next we will use our arms, in particular we will ensure our elbows are close to our body and we will bend them to allow the ball to push our hands back towards our face slightly and absorb a lot of the shot’s power in our arms. 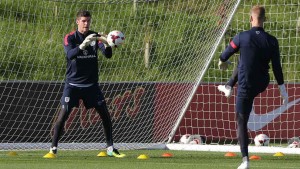 When to use it?

As mentioned at the start, this technique is used a lot! Basically any ball that is chest height or above should be caught using this technique – including crosses and most diving saves where the ball is not on the ground as can be seen in the images below. 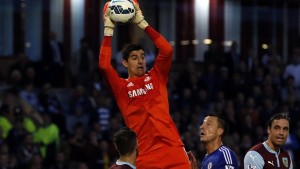 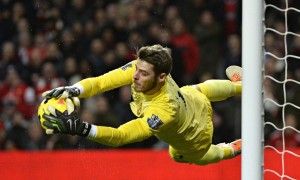 Problems to look out for

If you don’t bend your elbows your hands will likely meet the ball at the wrong angle and be unable to absorb any real power which will result in the ball bouncing away rather than being caught.

If your hands are too close to your body you won’t be able to absorb the impact and it will feel awkward to try and hold on to the ball.

If your hands are too low on the ball it can potentially slip out and end up with you pushing it into your own goal. 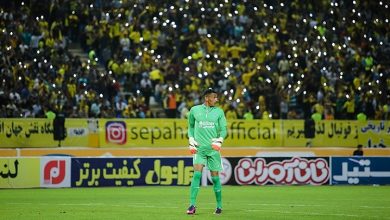 Winning the One vs One Battles as a Goalkeeper