One area in which England have produced talent over the years has certainly been in the goalkeeping department, where the likes of Peter Shilton, Peter Bonetti and Gordon Banks spring to mind from the past, alongside the more modern day options of David Seaman, David James and Joe Hart. But the current England number one, Jordan Pickford, is arguably letting the side down at this moment in time.

Pickford, who performed brilliantly in the World Cup, has struggled to kick on for both club and country since, with his performances coming under scrutiny for well over a year now.

As England are discovering in other areas of the pitch, talent is certainly coming to fruition now, with the FA’s long-standing commitment of producing more stars of the future finally paying off – quite literally – after years of investment. With Pickford’s place seemingly far from secure, we thought we’d take a look at a few of the emerging talents who could eventually replace him in-between the sticks for Gareth Southgate’s side.

An integral part of Sheffield United’s promotion to the Premier League and their remarkable start in England’s top flight, Dean Henderson’s breakthrough into the England setup seems inevitable. The Blades, who are currently priced at 13/8 (Bet365) to finish in the top 10 and maintain their impressive start, have had success not only with their revolutionary overlapping centre-backs tactic (which was instilled by boss Chris Wilder), but also their solid spine, organisation and sheer doggedness at the back, with Henderson one of the main organisers. He’s a dominant goalkeeper who commands his area and has a real sense of reliability about him.

Red Devils boss Ole Gunnar Solskjaer, who is currently priced at 25/1 (Sky Bet) to be the next manager to leave his post, certainly rates Henderson, saying recently: “Sheffield United and Wilder have had a big impact on him. He’s learning and growing as a human being and as a player. He’ll have a good career at Manchester United.”

After sweeping the end of season awards on-loan from Bournemouth at AFC Wimbledon last season, Aaron Ramsdale managed to dislodge Asmir Begovic from the number one spot at the Cherries this campaign. Since then, the former Sheffield United trainee and current England under-21 goalkeeper hasn’t looked back as he continues to make a real name for himself. Nicknamed “Rambo”, the confident 21 year-old has been one of Bournemouth’s star performers this season. Bournemouth – who are currently priced at 11/4 (bet365) to finish in the top 10 this season, although there are a number of other betting options available with your ultimate bookmaker betting offer at thebookiesoffers.co.uk, have relied on their bright young keeper’ at times this season, with boss Eddie Howe clearly trusting his undoubted talent. He’s a star in the making, all right. 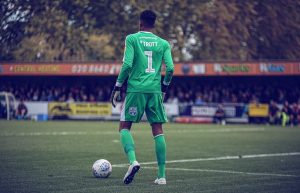 AFC Wimbledon’s League One survival hopes are under threat once again this season, with huge pressure falling on West Ham loanee Nathan Trott – as was the case last season with the aforementioned Aaron Ramsdale. The Wombles, who are currently priced at 2/5 (skybet) to stay up, have Trott to thank for their steadier form in recent weeks. The England under 21 goalkeeper is a remarkable shot-stopper, has immaculate distribution and is a cool, calming influence in the Dons backline. The Bermudan born keeper’ certainly has some growing to do but the potential is clear to see. West Ham’s Academy has done it again.