Peter Schmeichel was the finest goalkeeper in the world during his time at Manchester United. Famous for his blond hair, large frame and inimitable goalkeeping style, the big Dane was one of a kind. Incredibly, Schmeichel’s son Kasper has inherited his father’s style and stature, and that has made him a hot property in the world of football over recent years. So much so, Precision Training has teamed up with him to launch the Schmeicholgy 5 Range of goalkeeping gloves.

Precision has been working closely with Leicester City’s star keeper to develop a range of gloves that is as comfortable as it is effective. Precision’s Matrix and Classic glove ranges are already used by several goalkeepers in the Football League, and this latest design is expected to be every bit as popular.

The news of this exciting product launch coincided with the announcement that the Danish stopper has signed a contract extension with Precision. The self-proclaimed ‘fastest goalkeeping brand in Britain’ is obviously serious about increasing its market share, and its impressive commitment to product development could lead to a greatly increased presence in the Premier League over the next few years.

The new range of Schmeichology gloves will, for the first time, include futsal gloves, as well as a selection of Fusion gloves. Some highly innovative and stylish designs will be available at launch, including their so-called ‘Roll Finger’, ‘Palm Finger’ and ‘Flat Palm’ options. 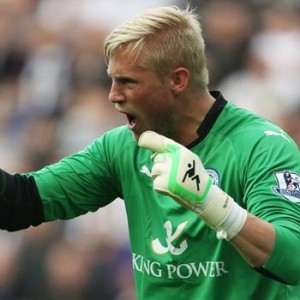 David Sanderson is the Marketing Director at Precision, and he believes that this latest range of goalkeeping gloves could hasten the growth of the brand throughout Britain.

“Kasper has been a huge part of the success of Precision Goalkeeping, and we are delighted he has committed his future to the brand.

“The Schmeichology range continues to go from strength to strength, and we look forward to working with Kasper for many years to come.”

A Small Company with a Growing Reputation

Precision Training is a Nottingham-based manufacturer of footballs, sportswear and goalkeeping gloves, and the company’s growth since its inception in 2005 has been nothing short of remarkable. In just ten years, Precision gloves have made appearances at the UEFA European Championships and in several UEFA Champions’ League matches.

Kasper Schmeichel is excited about the opportunity to continue what has already been a fruitful relationship with the up and coming brand.

“It is every goalkeeper’s dream to have their own range of goalkeeping gloves, and I am really pleased to continue the partnership with Precision Goalkeeping.

“I get thousands of messages on social media from keepers across the world who have been playing in the gloves, and the growth of the brand is something I am very proud to be part of.”

With the likes of Graham Taylor, Peterborough’s Ben Alnwick and Wales boss Chris Coleman all getting behind Precision products, the future looks bright for one of Britain’s fastest growing sports brands.

Malcolm Cox is a journalist and copywriter who has written extensively on the subjects of sport, politics and news for more than 20 years. He is currently working with The Soccer Store to promote the full range of Precision GK gloves and sportswear.