Let’s face it, Man City have been getting a fair amount of bad press about their manager’s goalkeeping choices, and not without reason. Guardiola has openly stated that without silverware or the Premier league title (challenging at the bare minimum), his job is at risk. And his choice of goalkeeper, who was specifically chosen as a transfer target by Pep, to fit the mould he is creating his team in, isn’t helping matters.

Without a top tier goalkeeper who can facilitate a playing style through a cornerstone passing goalkeeper from the back out, he is not going to be able to dodge criticism forever. Why Pep needs Neuer is glaringly obvious: Man City need a goalkeeper who is good with their hands and feet (insert jokes involving Pat Jennings saving with the feet, De Gea); he needs his goalkeeper to stop shots as well as create scoring chances from the back. Which he isn’t doing right now, and costing his top-four side the honours that those in charge were probably expecting when they brought in Pep.

Times are a-changin’ as a goalkeeping version of Bob Dylan might say (my parents were hippies…), and coaches are more readily searching for ball playing goalkeepers to create plays in their high-pressing, total-football dream teams. The modern goalie is comfortable being a passing option just like any other player on the pitch, with young goalies coming through displaying their outfield skills in their play; something that Jordan Pickford was showcasing before he got injured, providing a scoring link-up, picking out lone striker Defoe with pinpoint accuracy.

But goalkeepers still need to stop shots and it doesn’t matter how many goals you can score if you’re leaking goals; something that Brazil fans can historically affirm.

And whilst Bravo is still being supported by his manager, his actions on the pitch belie that trust. Top level ‘keepers are judged on their ability to be consistent and not make mistakes. And for Bravo especially in distribution, or rather, avoiding mishaps, like Robles making a hash of rolling the ball out to his hapless defenders against a free-roaming Tottenham and Harry on-song Kane.

Finding a goalkeeper that is able to do play like an elite sweeper-keeper and is also available to sign is proving difficult. And there aren’t too many goalkeepers that can start attacks from the back through their own footwork, and given how prized they are by pressing teams, it’s no wonder that Pep’s options are limited. Barcelona will do all they can to keep hold of Ter Stegen (Pep’s preferred choice) and he is likely to never move. 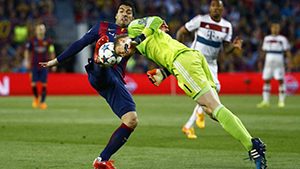 It is rare enough to find a goalkeeper that can play with the skill of a passing midfielder, which was unheard of enough in Valdes’ time as the ‘Barcelona midfielder who played with gloves on’, but a goalkeeper that is the perfect hybrid of sweeper and stopper, capable of doing both, is even rarer.

This is where Neuer comes in. He is even more unique because of his fifth-defender approach on top of his shot stopping and sweeper abilities. He would be invaluable to Pep’s squad and would make them title challengers for years to come.

And it is Neuer’s extreme sweeper keeper playstyle that sets him apart. A radical style that pushes itself to its limits, Neuer is an extra defender with gloves on rather than simply being a goalkeeper; known for being out-of-the-box, both figuratively and literally in his play. If becoming infamous for his Higuita style slide tackling shenanigans in the last World Cup is anything to go by, he could prove even more popular with City fans.

Fundamentally incorporating this approach would fit City’s system even more nicely than the added layer of a sweeper keeper (let’s not forget Bravo’s sending off for handling outside the box to avoid giving away a goal against Barca). With a backline maintaining a high line up the pitch for the majority of the game, leaving the goalkeeper exposed at the back, Neuer would be an indescribable asset, playing outside his box and rushing out to head clear or intercept a cross or through long ball.

But City and their sponsors are going to face a mountain to climb if they wish to pry Neuer away from the German leagues. Having worked with Neuer previously at Bayern, Pep has the slim chance of being able to lure him away, but he is a talisman of German football and German goalkeeping and loyal supporters wouldn’t be keen on the idea. And let’s not forget that Neuer famously snubbed Ferguson after impressing in a Champions League game against his side.

Managers hiring goalkeepers they have previously worked with isn’t exactly unheard of in the Goalkeepers’ Union. After all, Paddy Kenny has been reunited with Neil Warnock five times! Getting hold of Neuer will be difficult, but you never know, stranger things have happened!

Pep needs Neuer like an American sandwich needs peanut butter jelly time, or I need an espresso in the morning, or something, but you get the idea. Without him Pep is going to struggle in the short term let alone long term so he needs to ask City to do everything they can to get him, or find a good enough alternative, that at least distributes the ball better than Bravo.