While most goalies stick to off-pitch sessions to work on specific muscle groups or fitness, playing other sports like futsal can actually be helpful when it comes to core skills like hand-eye co-ordination and reading the play.

American sports coaches and gurus call this ‘cross training’ (as you train across sports, away from your main sport for fun/general fitness) and futsal played in or out of season, is great for keeping up fitness levels and working on technique in an abstract, rather than defined way (i.e. do this drill to work on this game scenario).

Whilst it may seem odd to move away from your main sport to get match ready, there are reasons behind it for making you a better goalkeeper.

After all, Brad Friedel and Tim Howard who both played multiple ball sports in turn had a strong foundation for their success because of the skills they worked on in other sports. Another example in another sport, but Pekka Rinne, who took Nashville to their first Stanley Cup, has a really active glove hand (to swallow rebounds) because of the baseball he played as a child.

So how can playing in goal in futsal be useful for footie goalies when you’re playing on a different sized pitch and rules?

Reflex saves can only be heightened by working your reaction times and lessening them; in one way, the only way to know for certain how fast your reactions are, is to test them against the best.

Without access to this, futsal can fill the void. Because of the small pitch space and the speed of the game, shots are going to come in thick and fast and you’re going to have less time to read and react. This in turn works on your decision making under pressure as you have less time to think and have to react more and save intuitively.

Because futsal relies on blocking saves rather than catching, as you stay up strong and look big to cover as much as possible, the goalkeeper can practise palming away shots and effectively controlling rebounds.

Palming away shots when diving low, or blocking with close-in shots when spreading out or on a 1-on-1, can be considered the focus of the game/session, as you work on being able to translate this kind of technique into your football games.

Goalkeepers like Neuer and Ter Stegen use their hands like this in blocking and even though it’s unorthodox (feet saves were too before!) it’s something you can take away from your futsal practise that you can proactively look to use in these game situations. 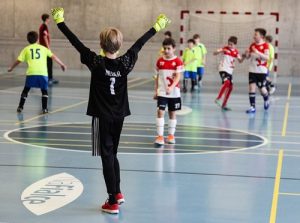 Saving with the feet

Using the feet to block becomes a primary way of blocking close shots in futsal as it allows you to save-clear; saving the shot and clearing to safety on the rebound, with good control.

Like the way Onana uses his feet when standing tall and challenging in-close against 1-on1s, or Lloris will block shots between his legs by bringing a foot in, you can work on the eye co-ordination of ball and feet to save actively in your football season.

Staying up longer on the play and working on your angles and positioning really comes into play and will definitely help strengthen your understanding of angles and your positioning when you go back to football.

A smaller playing area means one-two plays and passing opportunities are more deadly, so you need to be quick to cover side-to-side chances with strong footwork.

Fast feet are important, which makes it great to work on and practise your movement and footwork, focusing on speed and agility.

Fast recoveries on rebound saves and recovering quickly to get behind the next shot, is again something that translates well into football, and futsal will be really helpful in getting you lots of opportunity to practice.

Again because of the smaller pitch size, shots are closer in and you are more likely to face short to mid-range football style shots than the long distance pot-shots seen on a full sized football pitch.

This gives you heaps of practise dealing with scoring chances that are close-in; with shots inside the box as players drive through the defence or where you would have to face closer shots, rather than long distance attempts at the corners or from the top of the area, with players pressing high as a unit.

Short corners are another scenario just like after a rebound or scramble situation; with a headed opportunity pushed out, only to have another player volley home the rebound.

Overall, futsal is a fast paced, exciting game that is growing all the time – its tons of fun for goalkeepers and can massively improve your goalkeeping in today’s fast and furious game of football so why not give it a try!

Want to find out more about futsal? Check out this page from The FA