After another round of international fixtures, filled with excitement, drama and most importantly, lots of talking points surrounding goalkeeping, I decided to tackle the burning question amongst England fans, who actually is our best goalkeeper?

There is clearly a vast array of talent to choose from, which does not make this such an easy task; Joe Hart, Jack Butland, Tom Heaton, Fraser Forster, Ben Foster and Jordan Pickford all spring to mind as capable number ones, but who should it actually be?

The latest internationals saw Hart, Heaton and Butland don the gloves for the Three Lions, however Hart was the only keeper to play in the competitive fixture, against Scotland. Hart has had a stellar season in Calcio A after being loaned out to Torino, boasting one of the highest save percentages in the entire league, which is no mean feat as it contains Buffon, Handanović, Pepe Reina and young goalkeeping prodigy Gianluigi Donnarumma.

However, Hart also has an unwanted position near the top of the “mistakes leading to goals” list, something which he is often criticised for, despite what Head and Shoulders would have you believe. This ugly stat arguably reared its head again in the Scotland game, with many questioning his positioning skills, after conceding two very similar direct free-kicks from Celtic striker Leigh Griffiths.

There is absolutely no doubting Hart’s exceptional talent, but it may be time for a cooler head between the sticks in the future, as international football requires having to perform consistently to the best of your ability and it seems the weight of this is taking its toll on Hart.

Someone who seems to have both the mental and physical ability is Stoke keeper Jack Butland. FIFA players will know that he is constantly making save after save for their Ultimate Teams and he also does the same out on the real pitch.

An injury ravaged campaign last year no doubt stunted his growth in ability, but will have drastically improved his mental conditioning. After such a long layoff, he naturally slotted immediately back into the first team towards the end of the season and gave a series of strong performances, showing he still has both the talent and potential to succeed and become one of the world’s best, proving that the injury may have been somewhat of a blessing in disguise.

There was never a huge gulf in class between Hart and Butland, however as Butland has proven his mental capabilities towards the end of the season, and also with a couple of crucial claims and saves in the second half against France, he looks fit and ready to take Hart’s number 1 jersey. 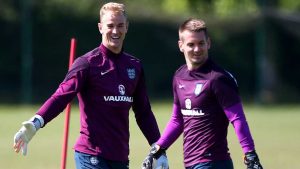 However, that spot won’t come easy. Current third choice Tom Heaton will be chomping at the bit to cement the number one position, especially now he’s reached the milestone age of 30 and is in the prime years of his career. His shot-stopping ability is up there with the very best and having pulled out some top drawer saves for Burnley this year, he looked to carry this forward in against France, with a chance to prove himself in the first half of the friendly.

He returned to the dressing room once again having showcased this ability, but having conceded twice. Both goals came from rebounds after stops by Heaton, however some are labelling the first as his fault, as he failed to push the ball wide enough to prevent Samuel Umtiti from pouncing on the loose ball and bundling it into the back of the net. The second goal by Djibril Sidibe was very similar, but was much more difficult for Heaton to execute both the save and positioning of the ball.

Heaton’s mental stamina is also fantastic, having plied his trade often in the lower domestic leagues earlier in his career. Overall, Heaton proved his credibility as a backup option for England, but did little in terms of staking his claim on the number 1 shirt.

His mental strength is something which other contenders can learn greatly from, however even at the peak of his ability, it seems as though both Hart and Butland have enough about them to retain their places ahead of him for the foreseeable future.

Another young talent who could learn from a more experienced head is soon-to-be Everton keeper Jordan Pickford. Experiencing relegation with Sunderland last season will no doubt have taught him a lot in the mental aspect of the game; he has also shown on numerous occasions that he has the capabilities to pull off extraordinary saves on a regular basis.

The question is whether he is mentally ready, not only for the step up to international football, but also for the step up to a top half side like Everton. In terms of representing England, it is best to see first how he copes under a more intense spotlight and if he keeps performing as he currently does under greater pressure, then it will be time to throw his name into the mix for the number one position.

One or two more seasons of development can do no harm to Pickford, as he stands to be battling it out to be our next top keeper with Butland in the not too distant future.

Both Fraser Forster and Ben Foster have seen their names crop up in relation to England as well, however average campaigns from both last season, have given Southgate very little to think about in terms of selecting them for the Three Lions.

Forster also had a long injury lay off recently, however seems only to be a fraction of the player he was beforehand, unlike Butland who came back just as strong. And let’s not forget that Foster has already had his chances to break into the England side before, but lost out to previous number ones like David James, Paul Robinson and more recently Joe Hart.

Overall, the future of England’s goalkeeping seems to be very bright and it may be time for Southgate to start giving these fresher faces a chance to prove themselves ahead of the more established guard.

What do you think of our selections, who would you change? Let us know in the comments below or on social media!